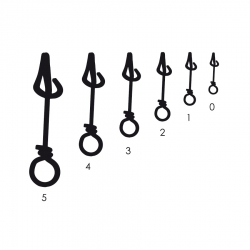 Mustad FASTACH Clips lets you change out hooks, lures and bait in just a few seconds!

I started traveling to Brasil as a missionary, maybe six years ago. I've
since married a Brazilian woman. About 4 years ago, I moved to Tres Marias,
central Brasil in Minas Gerais State and I started fishing again. Mostly
for Peacock Bass and Dourado.

I started carrying lures back here from the states and made a small lure
store in my house. Then, I started making flies and jigs. Now, I have a
small following. Next, I will begin following the tournaments and set up a
small booth selling my custom jigs to help make the rent.

Those Mustad Fastach #4 snaps are a part of a new process. They've been
hard to find lately!!! Anyway, I make my own fast disconnect weighted jig
heads to pull large buck tail type flies. I give the "fly" fisherman's
advantage to the guy using a bait caster. I modify (shorten and bend) the
wire used in the Swingtail Poison "Do it Mold" to connect to the Mustad
Fastach snap and pour the mold. So, I end up with a fast disconnect Poison
jig head in 3/8, 1/2 or 3/4 oz.

I powder coat and bake the heads and epoxy in nice 3d eyes. I vary the
color combinations with a quality silicone skirt. I can attach up to a 7/0
hook. The articulated swim action is awesome.

Unfortunately, the battery charger for my camera is broke. When I get back
up and running, I will send you some photos.

I purchased a leader about 10 years ago with the fastach clip system
on it. I really liked the quick change out of lures and the
dependability of retaining them even under heavy loads such as large
fish, for me it is Muskie! Since then I have not been able to find a
leader constructed with fastach clip. So I have been building them,
thanks to you. I have all my fishing friends and family using them as
well, they all love them. So thank you for making them available for
us to purchase.
John on 07/14/2015 03:43pm

I fish only for
Barramundi in remote north of Australia and constantly alter lures off the
shelf.These puchases enable me to make many changes to existing lures as bought out
of the packet.
Tweets by @JaggedTackle